All hail the King of Fruits! The Durian is a super popular and well-known fruit for its spiky exterior and creamy/custard-like interior. It is also (in)famous for its pungent smell, causing it to be banned from public transport systems in Singapore!

With so many variations and types of Durians, it’s hard to keep track at times. Don’t fret, as we will be breaking down the types of Durian and when their season is so that you know how, what, when and where to satisfy YOUR Durian cravings!

What affects the price of Durians?

Before diving into the types of Durians, let us first look at how Durians grow and what affects the prices of Durians!

Once the Dry Season begins, mature Durian trees will start to develop flower buds. The Durian tree needs approximately 3 months for it to start developing fruit and fully ripen. Durian trees require just the right amount of water to fully develop great-tasting fruits. When there is good weather, Durian plantations can produce a steady number of durians.

However, in the case of Bad weather—whether too much rain or too little of it—can cause Durian trees to produce a smaller amount of fruits. When the supply of durians is small, the prices will increase.

An increase in demand for Durians would also cause prices to increase. Plantations in Malaysia supply durians to not just Southeast Asian countries, but to China as well. When more countries vie to get a share of Durians and there is a limited supply, the prices will be higher.

Now that we know what affects the prices of Durians in Singapore, let’s uncover the different types of Durians available for sale!

Durians are generally categorised into 2 main categories – Bitter or Sweet. People generally prefer one flavour over the other, but fret not if you prefer both, as there are Durians out there which are both bitter and sweet! Now, on to the types of Durians.

The Mao Shan Wang Durian is probably the most popular Durian among Singaporeans, alongside the D24. The MSW Durian is rich and creamy in texture, and is both bitter and sweet, leaving a bittersweet taste in your mouth after consuming it. 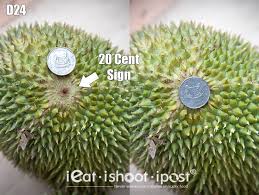 Back in the 90s, the D24 was the talk of the town. Before the rise of the Mao Shan Wang Durian, Durian lovers had one (and only one) Durian they longed for, and that was the D24 Durian.

D24 durians are a little less overwhelming in flavour and are known for their creamy texture and subtle bittersweet after-taste. If you’re not that familiar with durians, this is a good Durian to start off with without being too taken aback by the strong taste found in more strong tasting Durians.

To distinguish a D24 from the rest of the Durians, observe the stem of the Durian, which is shorter compared to other Durians. It also has a brown-coloured ring around the bottom of the stem.

The D24 Durian may also be referred to as the Sultan at times, so don’t get confused!

You can probably guess the taste of this one from its name alone. If you fancy your Durian with an Intense and Bitter taste with a slightly alcoholic aftertaste, the XO Durian will be perfect for you. It derives its name from the way that it is prepared, in which it is fermented for an extended period of time in its shell before being put on the shelves to sell.

It has a pale and yellowish flesh that is slightly watery. XO durians are typically round or oval and their thorns are pointed inwards at the base of the fruit.

The taste of this durian depends largely on the age of the tree that it grew from. Younger durian trees yield sweeter fruit, while the more Mature trees produce more bitter fruit.

Red Prawn durian shells are thick due to the wide core of the durian, so there might not be a lot of fruit.

Some other names the Red Prawn Durian goes by are Hong Xia, Ang Hei and Udang Merah.

The Black Pearl durian has a smooth and creamy flesh which boasts a subtle bittersweet aftertaste, which won’t be too strong if you have sensitive tastebuds.

To distinguish it from other Durians, look for for a small Durian shell with a stubby stem.

The Green Bamboo Durian may also be called Qing Zhu.

As you can imagine, the Black Thorn Durian gets its name from it’s slightly darker thorns on its spiky exterior.

Its flesh is bright yellow and creamy, which is also sweet and custardy in taste, similar to that of the MSW Durian, with the only difference being that the Black Thorn Durian’s taste is not as rich with a lighter texture.

It also has an intense dark yellow colour, which is probably it derived its name from.